Why Every CISO Needs to Track Insider Threats More Proactively 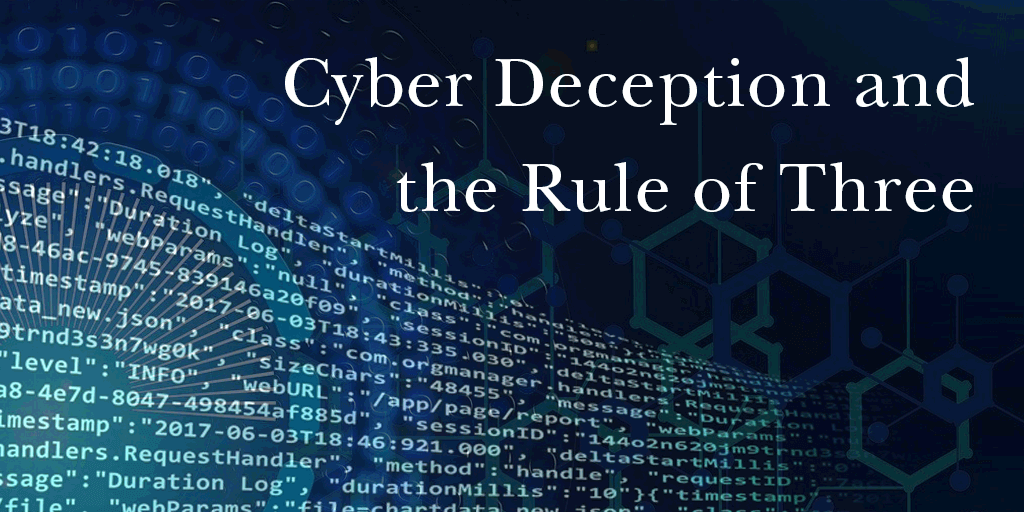 When it comes to looking at how to deal effectively with insider risk, not many security leaders will be thinking of deploying cyber deception to deal effectively with this problem. In fact, many leaders may think intuitively that the problem belongs in a different department (legal, internal investigations, etc.) and it is not part of their remit. However, every CISO needs to be part of the stakeholder group that deals with insider risk. In this blog post we’ll demonstrate how deception technology must be deployed to deal with this problem effectively and rapidly and talk about the concept called “the rule of three”.

When CISOs are developing their overall cybersecurity strategies what often gets overlooked is that cyber risk can and does originate from within their own organisations. This situation can often arise due to something that is deeply rooted in all of our decision-making processes: cognitive bias.

There are numerous types of cognitive biasses that have been identified by research. What is important to know is how this impacts a CISO’s ability to objectively understand how his or her cybersecurity risk is distributed across the organisation, how much of that risk emanates from within their organisation and how much of it originates from cyberspace.

Due to the sheer diversity of threat actors and threat types, the focus understandably always falls on who is trying to break into your organisation from cyberspace. This is where the cognitive bias kicks in and CISOs begin to focus very heavily on how to keep external attackers at bay and overlook the risk that actually sits within the organisation.

An obvious place to start is to define clearly what we mean by an insider threat. It is not limited to employees stealing data from your organisation. An insider threat needs to include your supply chain, former employees and any individual that has inside information about security processes and practices. It does not have to simply include employees that have a good technical understanding of how your network is defended. It can also include those who may simply know the frequency of password changes. Traditionally insider threats are broken down into three distinct categories:

How big is the problem?

The Ponemon global report ‘Cost of Insider Threats 2020’ provided some interesting data points that help to accurately quantify and qualify the insider issue:

Now this demonstrates that the scale of the problem is increasing year on year. Is this due to the fact that a cognitive bias exists? Irrespective of the root cause, the result is insider threats are being overlooked and have led to an upward trend in both the number of incidents and the cost per incident. Apart from being overlooked, the upward trend may point to the fact that the existing technology that is deployed to deal with insider threats is falling short of expectations. An excellent piece of research produced by Paul Furtado from Gartner, ‘Strategies for Midsize Enterprises to Mitigate the Insider Threat’, highlights one very worrying trend that encompasses all insider threats. That trend is the length of time it is taking to detect the threats in question. Paul’s research paper shows that “over 70% of breaches that begin with an abuse of access are only ever discovered many months or years later”.

What Can be Done to Tackle the Problem?

In the same paper, Paul talks about the “Rule of Three” as a means to deal effectively with the insider problem. This is where deception technology comes into its own by allowing CISOs to ensure that they can align themselves accurately to the rule of three. What is the rule of three? It allows a CISO to address the problem of insider threats by deploying his or her constrained security budget far more effectively. Below is a pictorial representation of the rule of three. 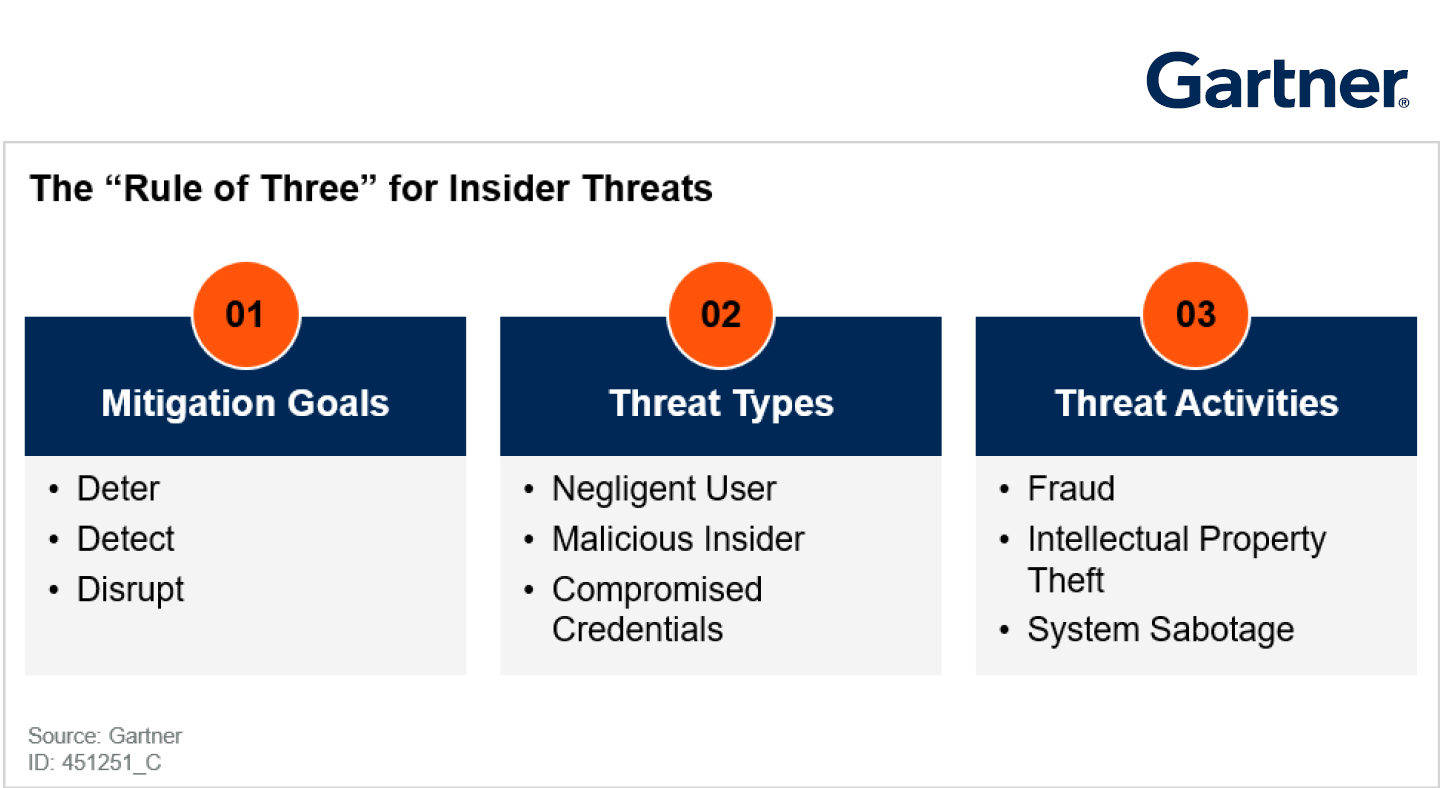 Cyber Deception and the Rule of Three

The first rule is that the technology that you deploy to deal with the insider threat must deter, detect, and disrupt. How is this done within the CounterCraft Cyber Deception Platform? The deterrence goal can be simply achieved by allowing it to be known that there is a deception environment deployed within the corporate network. What this does is shift the security paradigm. Now, instead of security toolsets having to detect the insider threat, the deception platform forces the insider to be right every time, and this creates doubt and indecision. This means we are disrupting the threat already even before any actual detection takes place. Finally, there is detection. Due to the way deception technology works deceptive artifacts can be distributed throughout a large enterprise without generating false positives. The end user has high fidelity alerts that will detect that they have a potential insider with malicious intent within their network within seconds of an artifact being touched.

Real-time detection of potential insider threats early on in the threat cycle will address one of the biggest pain points for organisations: the time to detection. Over 70% of breaches are only discovered many months or years later, by which time the business has suffered sustained harm in potentially lost data, intellectual property rights and schematics of how its security toolset has been distributed across its enterprise. The problem with traditional approaches such as analysing behaviour or monitoring data flows is that they have failed to identify or disrupt the insider threat.

This is borne out by the fact that over the last 2 years insider threats have increased by 47%. The data is demonstrating that now is the time for change in how we approach the problem of detecting, deterring, and disrupting insider threats.

We’re almost out of space on this blog post, so do please keep an eye out for the second part that will address rules two and three. For now, we would like to leave you with this thought. This post begins with the implicit assumption that an organisation has the ability to quantify and qualify the depth and breadth of its insider problem. Therefore, it knows where to deploy its limited monitoring toolsets. What if you do not have this visibility? Do you assume you have no insider issue? If you assume you have one, how do you know where that resource constrained monitoring needs to be deployed? The CounterCraft automated deception platform will help you to answer this fundamental question. Not only that, it grows with you on your security journey, helping you to implement the rule of three as your maturity expands. Do come back to pay us a visit for part 2 of the blog post on the topic of deception and the insider threat.